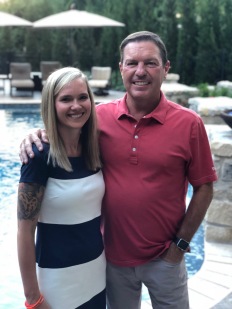 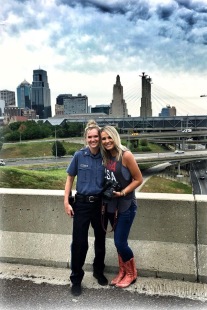 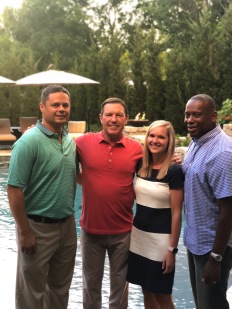 What a week it has been! I am extremely thankful and lucky to have such wonderful people surrounding me in my journey, battling ALS.

KCTV 5 did an outstanding job with their interview capturing what was truly a dream come true. Wearing the uniform one last time, working in the Royals dugout. If you have been unable to watch, click the link and check it out! KCTV 5 News Clip Neal Jones did an amazing job and I could not have been more pleased with how well he captured the moment and my personality. Thank you Neal! The outpouring support following the interview has been unbelievable and I thank you all very much! Sarah’s Soldiers are continuing to grow!

I was able to spend the past weekend with my sister, her husband, and my amazing nephew in St. Louis.  It was a great weekend! I love nothing more than quality time with my family.  We were able to attend a dear friend’s, father’s retirement party.  At the party, I was able to give Auggie who is 4 years old a gift bag full of KCPD goodies. Auggie loves all things police and fire. His face lit up, and it made my night.  Auggie is extremely special to me because he too is fighting, just like I am, and he is handling it like a champion.  Auggie was diagnosed with leukemia on Christmas Day 2016. I told Auggie we will soon be port pals and I will wear his ‘Aggie Super Powers’ bracelet alongside mine everyday. Auggie even convinced his dad to light off some fireworks in my honor.

On my car ride home, I was informed KCPD had two officers that had been shot and then a short time later a third.  My heart sank, I wanted to get home, I wanted to be there to help.  I am no longer physically capable of being there to fight that fight and that is a very difficult thing for me to process.  I just wanted everyone to be okay, and by the grace of God they will be. Some will take longer to heal than others but they are warriors and they will get to return.

After a busy weekend, Monday was a hard day for me. One of the hardest I have had in sometime.  I was unable to muster up any energy and knew I had a long day ahead of me.  There was a luncheon to take place later in the day, followed by dinner at Jeff Montgomery’s house later that evening.

I was fortunate to work at the North Patrol Division station for about three years alongside some amazing men and women. Captain Freed who I worked for while at NPD wanted to bring me back to North Patrol to see everyone after they all had heard the news of my diagnosis and because I know they missed seeing “smiley” around the station. Capt. Freed planned a lunch and invited everyone at the station.  I rallied through and I am very glad I did. There was a great turnout at the lunch and it was great to see everyone! At the lunch I was surprised to see an old friend Jeremy Dickstein whom I worked with at Blue Springs Police department.  He introduced me to his friend Ronnie Doumitt, who is the founder and President of a nonprofit organization called Answering the Call. Mr. Doumitt explained the organization was formed to financially assist officers and their families when medical needs such as mine arise. I was presented with a check from the organization that day! Mr. Doumitt assured me the organization was here for me and if I were to need anything in the future they would be there to lend a helping hand.  It was an honor to meet Mr. Doumitt and I am incredibly grateful for the donation he provided through his organization.

Monday evening, I was invited by Sgt. Tommy Woods to join him, his family, and Det. Dave Conchola at Jeff Montgomery’s house for a very elaborate chef prepared dinner. My brother, Jared was able to join in as well.  It was an amazing night! The dinner was incredible.  Jared was able to talk baseball with Jeff throughout the night.  I spoke with his wife, Tina, for most of the evening.  She was hilarious and I cannot wait to have a night out with her in the future! I had a blast! As a long time Royals fan, this was an amazing experience. Jeff showed us his trophy case which included his two World Series rings he allowed me to put on! Jeff and Tina were both very interested in my story and wanted to watch the new clip myself and Tommy had told them about.  Following the conclusion of the new clip, Jeff looked up and said, “I must have you on the pregame show with me.” We exchanged phone numbers and he insured me we would have me out to join him and Joel Goldberg in the near future. With the help of Tina, Jeff and George Brett we are shooting for joining the pregame show and throwing out the first pitch when the St.Louis Cardinals come to town on Sunday, August 12.

Tuesday, was going to be another busy day! I felt much better on Tuesday morning. I had to get ready for a photo shoot! At North Patrol I had the pleasure of working with Sgt. Bobby Wisdom.  Although he worked dog watch and I was on PMs we would always contact each other and share information about the bad guys in the area. His wife Brandi, is a professional photographer.  She was inspired by my story and wanted to do a photo shoot completely free of charge! With the help of another Officer and dear friend Deb Browning we were able to capture some great pictures and it was an amazing time.  Those girls really knew how to make me laugh!

Tuesday evening, I was invited to attend a kickoff party for the Walk to Defeat ALS.  I was accompanied by coworker and great friend Christina Ludwig.  I had the pleasure of meeting most of the ladies involved with the ALS Association chapter here in Kansas City.  They have welcomed me in since day one with open arms. Answering any and all questions my family or I have had and assisting in every way possible even if that just means a phone call to check and see how I am doing. They have been extremely uplifting and helpful to myself and my family. Thank you all!

I also had the pleasure of having dinner with my stepson, Michael, and his wife, Madi that evening.  I have not had the opportunity to see them for several weeks due to my vacation and Madi acing her Chemistry class in a whopping five weeks! You go girl! Madi is currently seven months pregnant. Meaning I will become a grandma at the ripe age of, 29 or possibly 30 (depending on when he makes his debut)! I can’t wait to meet the little guy and I am beyond excited for those two as they welcome their little peanut into the world.

The clinical trial went well and I believe my overall strength numbers were higher than they were at the KU Clinic the month prior! Very great news! I do have moments were it is harder for me to breathe and I am becoming more acclimated to the breathing machine, slowly but surely.

This past week has been incredibly busy and I am very grateful for all of you that are supporting me through this journey.  I would have never imagined I would be in a position like this, but it’s reality for me now. Everyone has had a part in making my first wishes come true. “Make me smile and laugh along the way” I have smiled and laughed all day, everyday and several times my cheeks have hurt from laughing so much. I can not express how thankful I am for each and every one of you who support me in this fight. We are soldiers and we will get through this together. I ask you to join me on Friday night at the Sandbox (509 NW Barry Rd) from 4-7 PM it promises to be a good time! I will have the bracelets there an order form for the T-Shirts. In addition to the gun raffle there will be other items for a silent auction as well.

As for the next adventures, Florida, Cancun, St. Thomas, back to the bay….  the list will continue to grow 🙂

Till next time! Love you all! Sarah #Sarah’sSoldiers #strongertogether #noonefightsalone

Dedicated to the fight against ALS on behalf of my lovely sister Sarah!! View all posts by #SarahsSoldiers-DebriefingHerArmy